Written by Marin @Danielis on December 09, 2020 in Yacht Reviews

Jeanneau’s Prestige 520 was announced in 2017 and it appeared at the international boat festival in Cannes in the same year. As is usual with Prestige models, it aroused great interest because it was supposed to replace the previous model - Prestige 500, which has proved to be very successful and which was sold to more than 500 clients in 6 years since its introduction. Should they make a revolution or evolution with a new model? To what extent to modify the new model and to continue to retain the interest of their loyal customers? For Jeanneau and the team of designers from the Garroni Design group, the new model posed a huge challenge because they wanted to continue the same successful path as the previous model. The Prestige 500 is still selling due to high demand, so it was necessary to carefully highlight the upgrades of the new model and position it on the market. 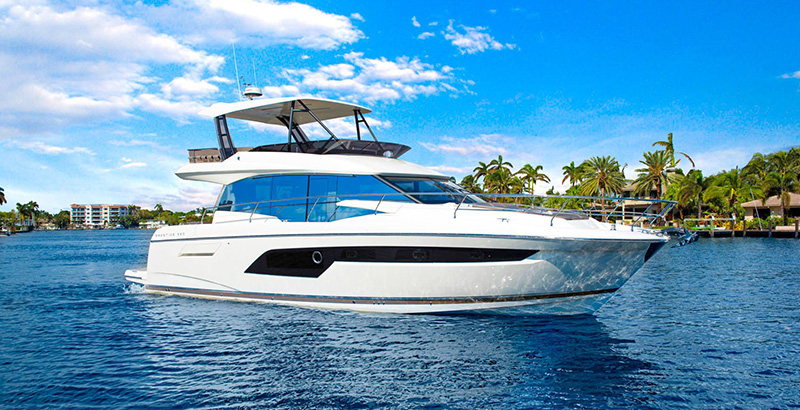 Basically, the hull of the new model is the same as the hull of the Prestige 500 model, but with significant upgrades and precise solutions with a recognizable style, which is also due to the reviews of users of the previous model. The biggest change, which is not visible, is in the construction of the ship. In the 500 model, the fiberglass parts were installed manually, while the new model uses a resin infusion process which gives the boat extra strength without compromising its weight.

The designers of the group Ganorri Design, who worked on the exterior and interior design, paid special attention to the appearance of the boat from the profile. They gave it a more modern look by using 50% more glass in making this model than in the case of the previous one. The side windows on the new model take up significantly more space and when viewed from a distance they look like they are made of one large glass pane. This way, the boat opens to the environment and allows greater light reception in the saloon, but also in the master cabin located in the middle of the hull. When sitting behind the steering wheel inside the interior cockpit, visibility is also unobstructed thanks to the large windows. Combined with bright modern furniture in the interior, the boat leaves an impression of cleanliness and breathability. In case you are getting too much sun for your taste, you can always lower the blinds, which are very well hidden on the tops of the windows. 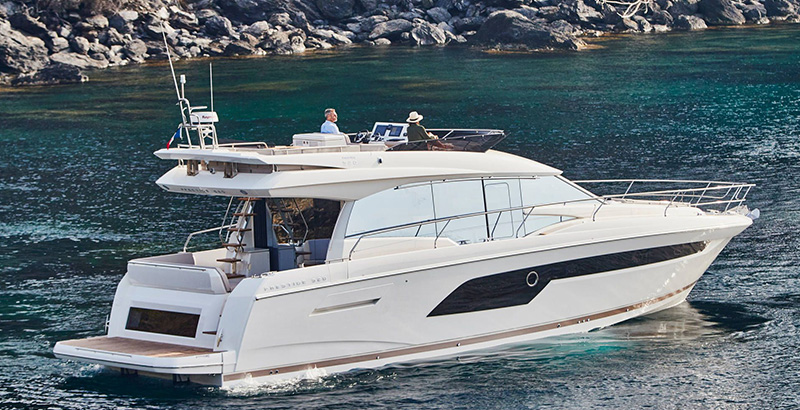 Speaking of percentages, the designers claim that the volume of the new model is 7% higher than the previous one. It may not be much, but the difference is somehow felt in the height, of course, in key places such as the kitchen and saloon, which will satisfy even those basketball-tall clients.

The open kitchen is almost identical to the kitchen from the previous generation except for more contemporary decoration and more upscale equipment. However, interesting solutions were made in the saloon area. There is a large L-shaped sofa in the living room and, what you might not expect, the sofas are indeed a topic of many discussions among sailors. Guests are actually often disappointed with the comfort of the sofas that are placed in the lounges. They are hard, uncomfortable, and made so that a person cannot relax in them but has to sit upright, which of course is not very natural. This is certainly not the case with this sofa which is praised primarily for its comfort. Perhaps here, too, preference was given to user feedback and design change was finally made. Across from the large sofa are a smaller sofa and a helm for the captain. What is interesting is that the captain's seat, if not used, can be turned into an additional seat for enjoying group socializing. You just have to press the button next to the backrest, and it will move to the other side now facing towards the rest of the saloon, not towards the bow. A new sliding door has been installed next to the helm which allows access to the side of the boat. Since it is a longboat, this can be useful to shorten the journey from the saloon to the bow, for guests, but also for the captain who will probably go out to hang fenders or to accept the pipe at the gas station. This door is definitely an interesting solution. It may not be ideal for taller people, but if nothing else, it certainly provides a pleasant supply of breeze to the saloon during good weather conditions. 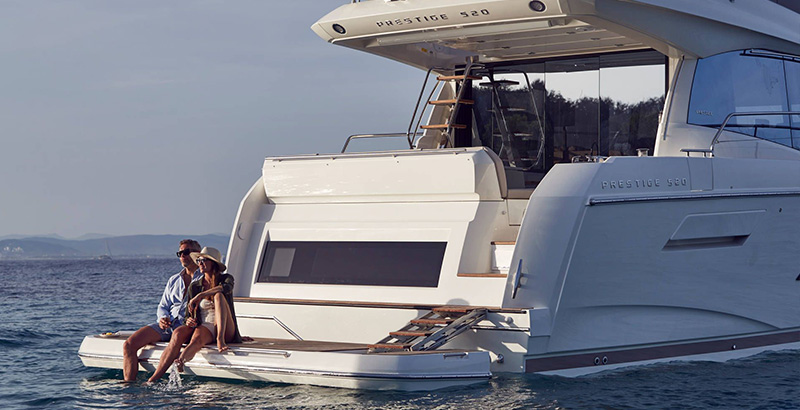 When we look at the Prestige 520 from a height, we will notice that the boat’s bow is a bit wider compared to the previous model. The very top of the boat is no longer rounded, but small extensions have been added, which ultimately allows easier passage through the bow and more volume in the VIP cabin that is located below. Some experts, however, argued whether this change will affect the unnecessary raising of the bow in the case of more demanding conditions and bigger waves. There are now two lounge seats on the bow for two people which seem smaller than on the previous model, however, this is not without reason as there is space left between them for a long window that brings light into the VIP cabin. Also, two small biminis are attached to the seats and they can be raised to provide shade while sunbathing. There are stainless-steel handles and cup holes as well. Guests can adjust the seats to suit their needs using adaptable floorings.

The impression of spaciousness and visibility is also expressed on the flybridge of this boat which is XXL dimension compared to other flybridges of motor yachts of this class. Still, it fits into its design and doesn’t bounce at all nor does it seem too high considering the hull of the ship. At the top of the flybridge, there is a guest table and a large bench with pillows where 6 guests can eat without any problems. To keep everything at their fingertips, there is another small kitchenette for complete enjoyment. 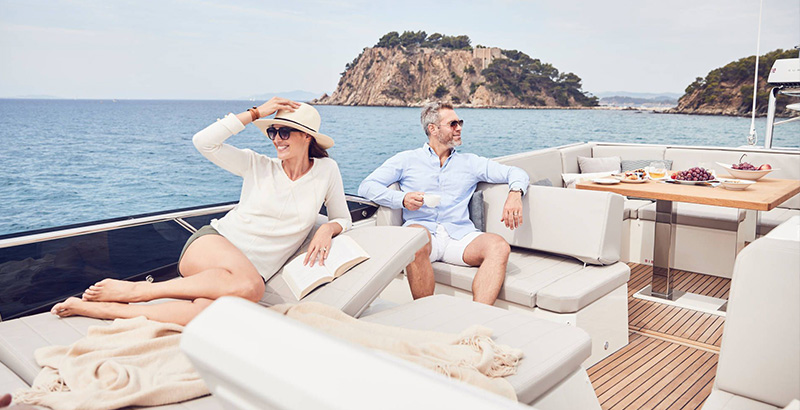 As for the layout, it is the same as in the previous model. The boat has three cabins and two toilets. The master cabin has a separate entrance while the front cabins are entered through the same corridor in front. One of the cabins is smaller and has two single beds, while the other one is a VIP cabin that has a double bed that can be separated at the touch of a button if you prefer a bed with two single beds. The owner’s cabin with independent access is the most exclusive signature of Prestige which was the first to offer such a layout in this size segment. The bed is king-sized and the cabin has its own toilet which has a separate shower of decent size. What will surely satisfy the fairer sex is a walk-in closet that can hold enough clothes, even for up to two weeks at sea. The boat can be ordered with the captain’s cabin and toilet in the stern or the same space can be used as a garage for the dinghy. 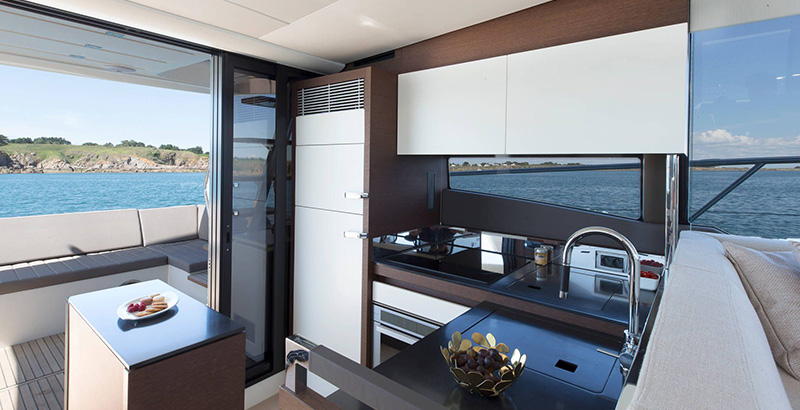 The boat has two control panels, one is inside the saloon and the other one is on the flybridge. Both are superbly equipped and have two large screens. The steering wheel in the saloon is adjustable in size, the plotter screens are dark and, best of all, there is no reflection and difficult visibility due to exposure to light. The right side of the control table is used to install additional switches, a power lever, and Volvo Joystick. At the stern of the ship where there are another table and sofa, there is another joystick for fine maneuvering which is hidden in the side cabinet.

Jeanneau remains faithful to the Volvo and IPS transmission for all models in the Prestige series and there is not much difference in the mechanics of this model and the previous one. There is only one engine package available and that is 2 x 435 hp. This makes the Prestige 520 slower than the Prestige 500 by 1 knot. The maximum speed of this model is 25.6 knots with a consumption of 170 l / h. Cruising speed is 20 to 22 knots and that is when the engines are quieter, stability is optimal as well as the pleasure on board.

Some see the lack of power as a flaw of this boat. If Jeanneau wanted a boat that could reach more knots, then they had to install bigger and more powerful engines, which in turn consume significantly more fuel. This is, of course, ultimately more expensive. This way, they are below the same class competition in terms of price, and yet they have not strayed too far from the price of their previously successful model. The starting price of the new model is 30% higher than the price of the Prestige 500, and this difference can be higher if the buyer wants to add certain extras such as a specific metallic color. Although there is little difference between the two models, it is the small finesse and key upgrades that make the important difference and promise great success for this model as well. 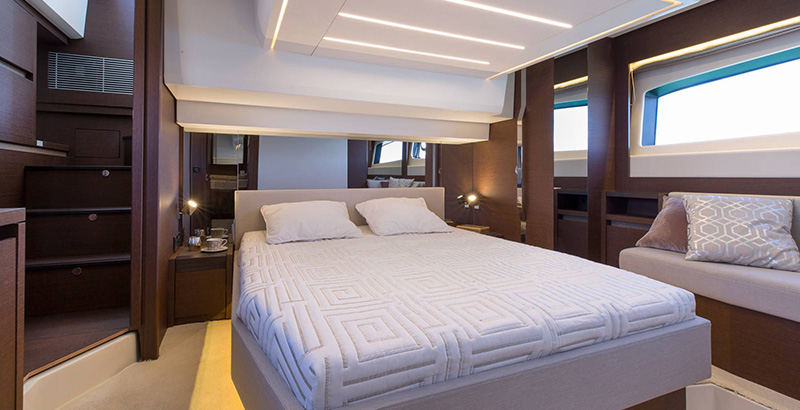