Written by Marin @Danielis on July 01, 2017 in Sailing Destinations 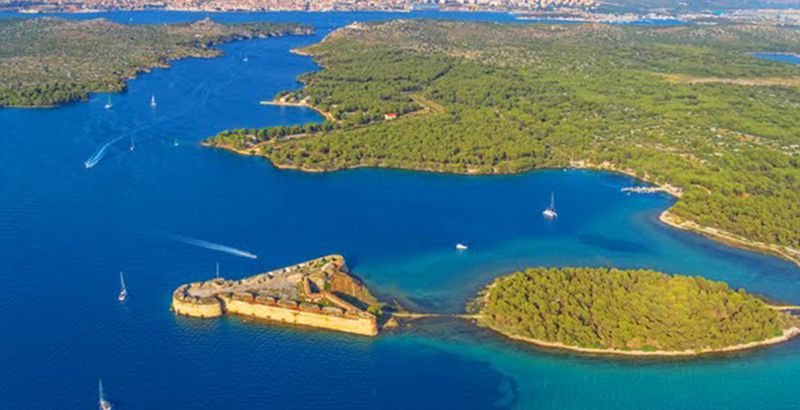 Nevertheless, even if we take these two national parks out of the equation, the whole area is amazing, and it is a region with 3400 berths in marinas of nautical tourism. Only on island Murter, which is connected ot the mainland by a small bridge in Tisno town, there are 3 beautiful marinas (Hramina in Murter, marina in Betina and ACI marina in Jezera). New marina in Pirovac is being finished soon. And further south there are large beautiful marinas in Tribunj, Vodice, Sibenik, Skradin, Solaris, Primosten and Rogoznica. Only in marinas there are 3400 berths, and on top of that, every litlle town mentioned above has a dock, a local pier intended for sailing guests. 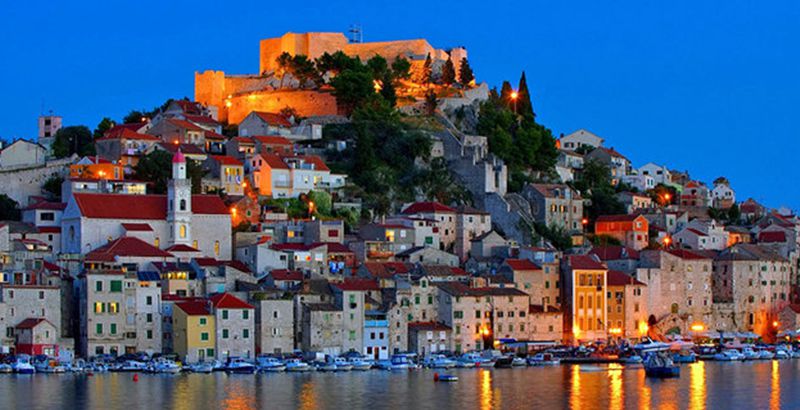 Altough, a typicall sailing route will take you either south from Sibenik – to Vis, Hvar and maybe even Korcula, or north – towards Kornati and Long Island, this article is more focused on islands and waters very close to Sibenik, not more than 10 NM away from the city, as this a very rich area, full of beauty and places to enjoy.

Maybe you will not find old towns like Vis, Hvar, Stari Grad filled with Renaissance Palaces and ancient roots, which are now becoming fancy and maybe also a bit crowded nowadays, but, you will find something a bit different and probably more relaxing.

In this area, everything is a bit more humble, there were more fishermen and farmers living here, than nobles, but, they also have their charms... On top of that the boom of nautical tourism has made them modern and gave them a new birth. Docks and boat berths are organized, anchorages settled, taverns opened. 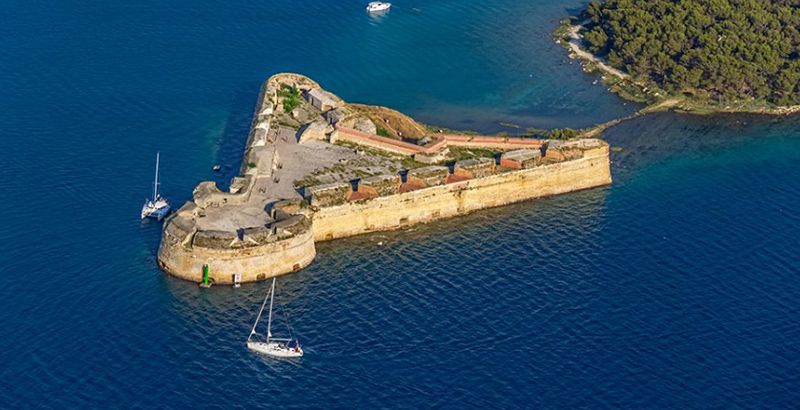 Ten years ago Sibenik city started fluorishing. With the development of marina Mandalina and by changing the purpose of military facilities, into nautical facilities, the city started breathing and it started living tourism. Marina is now in management of turkish Dogus group, it is also followed by a hotel resort as a part of it, and it offers everything a luxury guest might want and need.

Sailing into Sibenik port from the open sea, in many ways, is one to remember. It usually goes by passing between two islands Zlarin and Prvic, and continuining through the 1,5 NM long channel of St. Ante.

It is easy to recognize the entrance in the channel of St. Ante marked by a lighthouse on cape Jadrija on the left and the powerful fort of St. Nikola on the right. St. Nikola fort was built during the 16th century to defend the town from possible turkish danger from the sea. Altough, at that time the Turkish Empire already had Skradin under them. Altough with furious looks, guns from St. Nikola Fort never shot a fire. 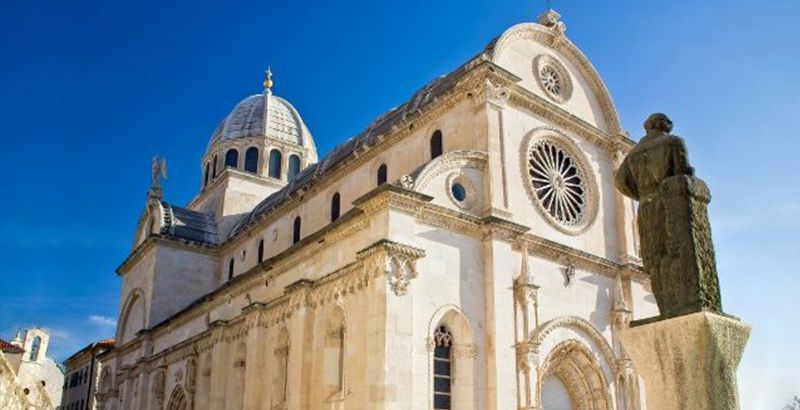 Sibenik is a city with three forts and a famous cathedral of St. Jacob. The oldest of three forts is one of St. Mihovil first mentioned in 11th century was rebuild thoroughly and it bacame a place for music and theatre events. The fort of St. John (Sv. Ivan) got it's fresh glory as it was used as a scenery to film 'Game of Thrones' show.

The city's night & festival scene is getting more and more exciting every year, as well as it's mingle and food&drinks scene. Our favourite here is restaurant 'Pelegrini' in the old town very close to the cathedral of St. Jakov. 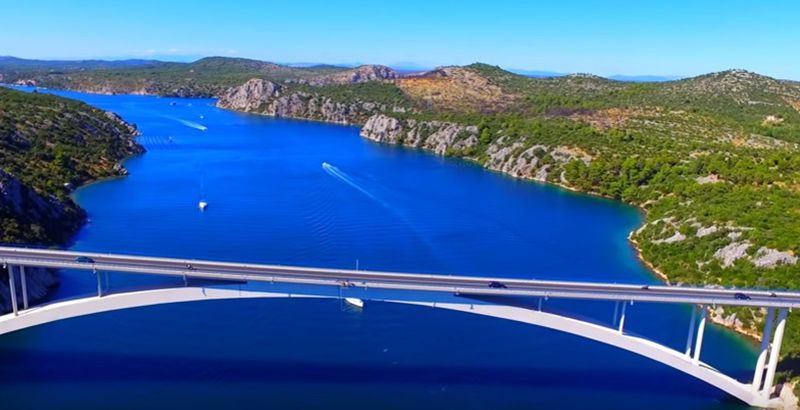 Sail to Skradin is not that long, barely 9 NM, but it's a special experience. As you start from Sibenik, first few miles is a sail in the Sibenik bay, further into the mainland by passing under the Sibenik bridge. The area is filled with shellfish farms, and you can stop and buy some fresh shells and easily make a 'buzara'. Further into the river (altough at this point is not really a river yet, the water is a mix of sweet and salty), you sail through gorges, steep cliffs, sometimes as high as 50 meters which river slashed on it's way to the sea. After a few miles from Sibenik, sailing through these cliffs, and after leaving a small village Zaton and it's small marina on the left, you will arrive to lake Prokljan. If you stop in the lake of Prokljan and you dive for a swim, you will note, that the lake is sweet on top, somewhere in the middle is mixed, and down on the bottom it's a salty water. That is why this lake is full of life from sweet waters and salty waters, and a great fertile water for shells. 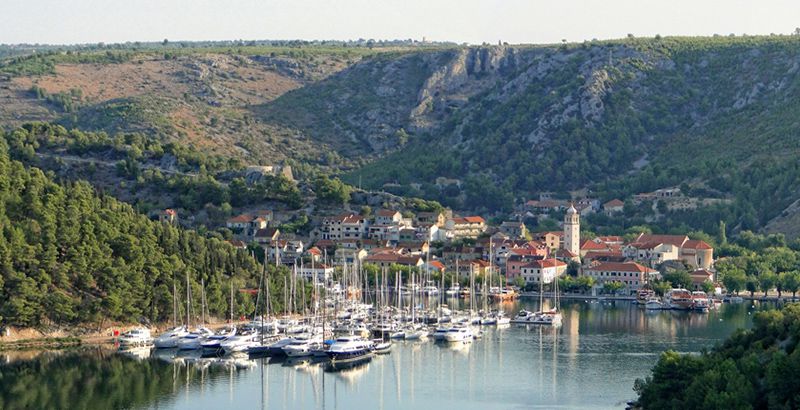 The lake itself is quite wide, but relatively shallow, with a few villages which are not that interesting to a sailing guest, altough they are developing too, and there are a few taverns with their own pear, right on the way to Skradin.
From Prokljan lake you continue through furhter strait with cliffs, and as you pass under another 65 meters tall bridge, you arrive to Skradin.

Skradin has a very nice ACI marina, and plenty of safe anchorage space with mud bottom. It also has about 10 berths on the local city pier. You can sail half a mile upstream from Skradin, but that's it. That is the place from where National Park of river Krka starts, and only boats with special licenses can continue. (Those are boats which take tourists to the National Park). 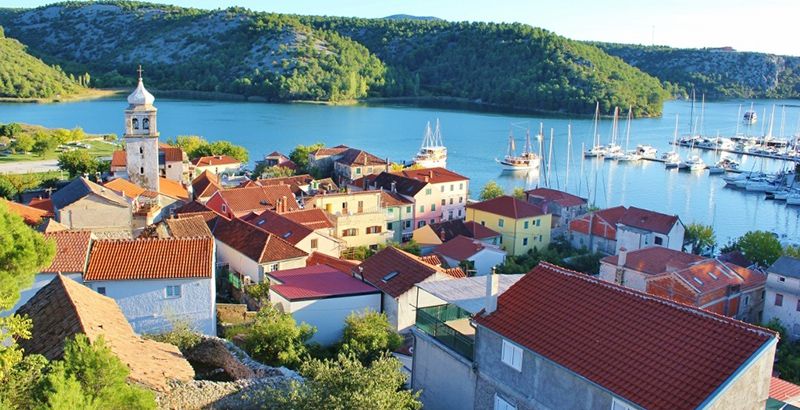 Skradin is not only a town to leave the boat whilst visiting the National Park Krka. It is also a town where you can see lots of interesting stuff and enjoy good river vibe and food.

Skradin is ancient Scardonia, the capital city of Liburn tribe who were at first enemies of Romans, and than allies. From 13th to 16th century it was a seat of the navy of croatian Ban Pavle Subic. Forts above the city remind uso f those glorius times.

Fertile fields around Skradin town give us good and healthy food and products many of which can be bought in Skradin town. The most famous restaurant is Bonaca.It's a place where you can eat eel, Prokljan shrims, risottos and special Skradin cake. 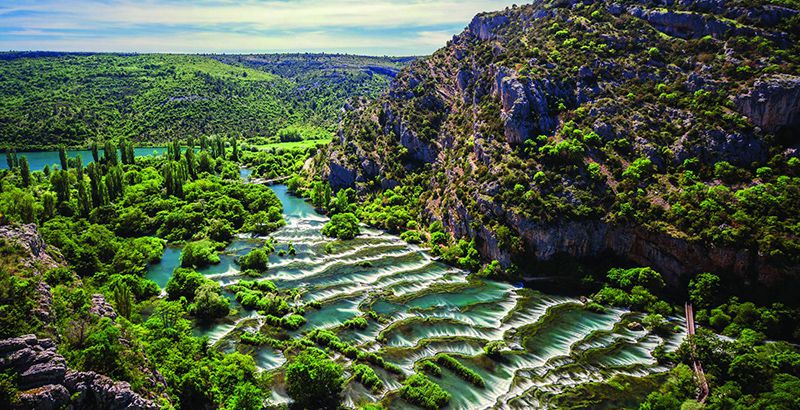 Once you leave your boat in Skradin, you can visit the National Park in a few ways.

It is either a boat ride, which is rather short, about 15 minutes, or a long walk, or a bike ride. You can rent bikes right in front of the local city pier. Sailing guests can buy their tickets to National Park in the reception building of National Park Krka in Skradin. It's easy to find.

But, if you go later in the afternoon, in the summer time, after 6 PM, many tourists are already gone, and you will be able to avoid the crowd and really enjoy the swimming in front of the big waterfall Skradinski Buk. It's the first one and the biggest one.

On Skradinski Buk, in the year of 1895. the first system for production, transfer and distribution of AC (alternating current) power was built. Altough, Tesla's AC powerplant on Niagara falls started working two days before this one on Skradinski Buk, it took them more than a year to bulit the transfer system from Niagara, so the actual AC power and electricity came to consumer much before the one on Niagara falls.

What else awaits you on your sailing journey from Sibenik?