Written by Marin @Danielis on May 07, 2017 in Sailing Destinations

The Croatian mountains, made of porous limestone are known worldwide for their deep pits and caverns. Many of the caves that can be found throughout the Dinaridic chain of mountains was home to the Neolithic man, with numerous artifacts to support that claim.

Croatian islands are in fact part of the same mountainous range, made from the same type of stone as the mountains that spread across the coastal region, so they are also brimming with caves, some of which are so unique that they attract visitors from around the world. 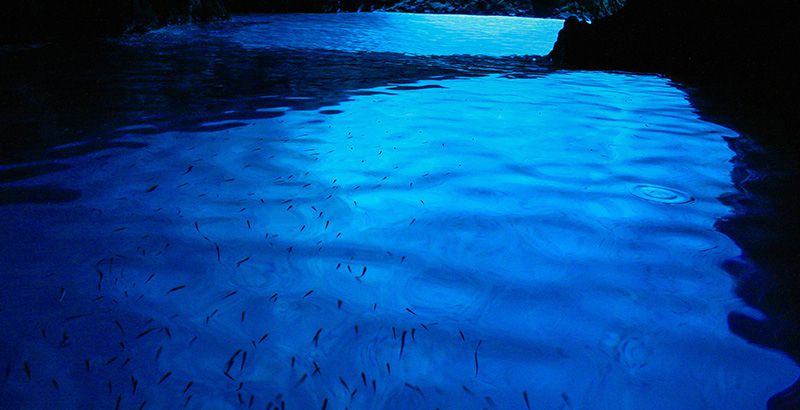 Located on the eastern side of the small island of Biševo, one of Croatia's furthers islands, lies the entrance to the Blue Cave. Even if you haven’t heard of the island, you have surely seen the photos of this place, which attracts tourists from around the world and is considered one of the most beautiful views of the Adriatic Sea.

This beautiful cove is specific due to the way the sun rays reflect of the limestone surface, making for a memorable sight. The cove has two holes, one is man-made and allows for small ships to pass through, and the other, much wider allows for the sunlight to pass through it.

On a bright sunny day, between 11 and 12 a.m., sun rays enter through the entrance in the water and are reflected off the limestone rocks at the bottom. The sun lights up the water which lights up the walls, making them shine in a blue color while the underwater objects appear to have a silver shine. 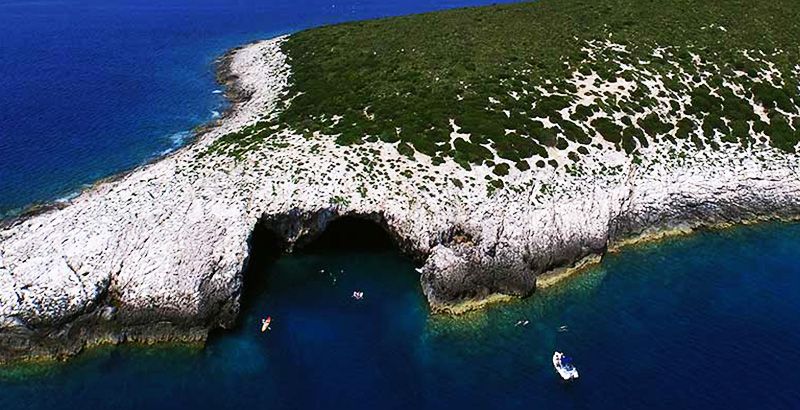 If the natural phenomenon at the Blue cave left you with a feeling of wonder, you can experience the similar interplay of lights in the Green cave, located on the islet of Ravnik, near the island of Vis. Ravnik is one in a series of islands scattered along the south-eastern coast of the island and for its unique characteristics is declared a protected area of Croatia.

The cave has a tiny opening through which sun rays can penetrate the cove, and then they reflect off the multitude of algae off the front doors, thus coloring the inside in an emerald green color.

When visiting the island of Vis, be sure to visit this marvelous interplay of sea, rock, and algae which will leave you enchanted. 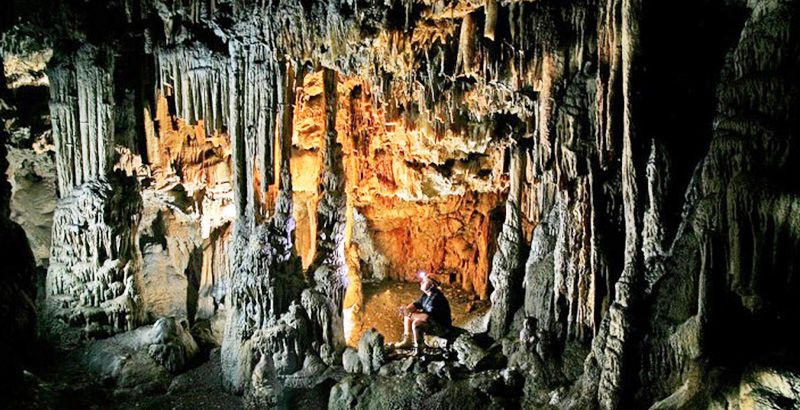 It seems that the area around the island of Vis is brimming with natural beauties. One of which is Queen's cave located on its northern shores, on a cliff above the sea level. The cave is an ancient one, consisting of 5 galleries connected by canals, some of which haven’t even been explored yet.

It seems that it has been populated since the Neolithic times, with archeological remains to prove the theory as well as in the Bronze Age. According to the legend, the cave was named after a powerful Illyrian queen who made residence there, Teuta. 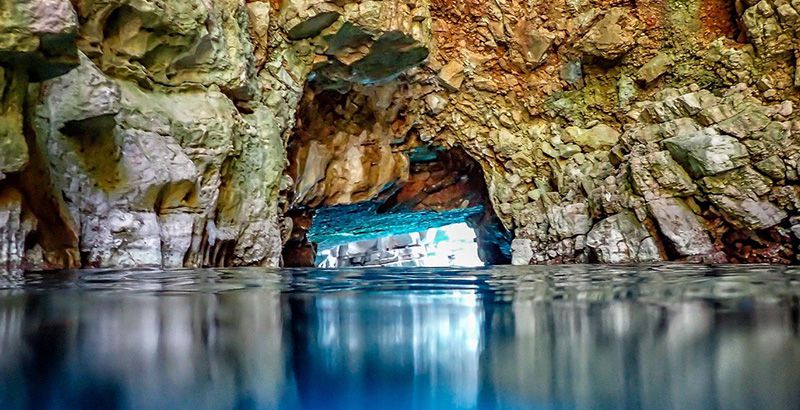 According to mythology, the legendary Greek hero Odysseus, while returning victorious from the ruins of fallen Troy to his wife Penelope, was shipwrecked on the island of Mljet for seven years, enchanted by the nymph Calypso.

The legend says that the hero’s ship was wrecked against the cliff underneath the sea surface, but he luckily managed to swim inside the cave nearby, thus giving it his name.

Odysseus cave is an attractive natural phenomenon, it’s a sea cave whose ceiling has broken off, leaving it looking more like a large well.

There is even a cliff, near the entrance, which is completely covered by the sea during high tides, thus confirming the legend.

The cave is especially beautiful during the high noon, when the sun rays strike the sea from above and disperse on nearby stone walls in a rainbow of colors, making for a memorable sight.

It is no wonder then, to imagine that Odysseus could have made it his home for 7 years.

The entire island of Mljet is extremely popular with those wanting to experience their own little odyssey since the island is filled with untouched coves, so visiting Odysseus cave is a must. 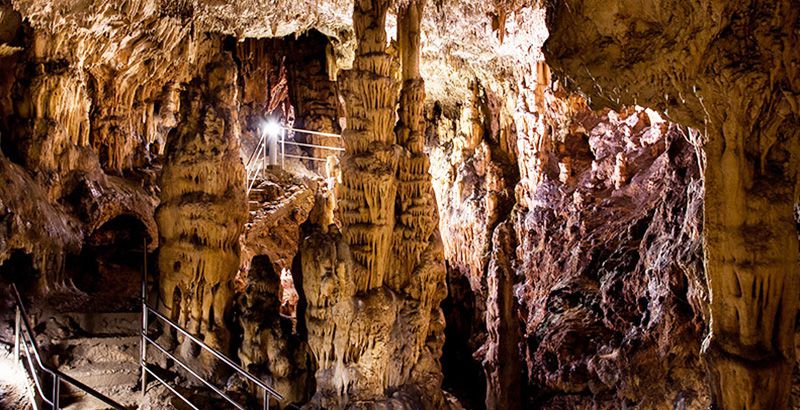 One of the most visited caves in Croatia is the Biserujke cave, located near the village of Rudine, on the island of Krk. The island is filled with caves, there are 54 of them, of which Biserka is the largest and only one open to visitors. The cave is filled with stenoendemic species, such as insects, spiders, centipedes and a rare type of shrimp.

Not only rich with life, the cave is famous for its magnificent interior which is decorated with stalactites, stalagmites, and columns made of calcite.

Another interesting thing is connected with this cave, it is named Biserujka (pearly one) because according to a story Adriatic pirates used it to hide their treasures. Maybe you get lucky and find a piece of it lying in the depths somewhere! 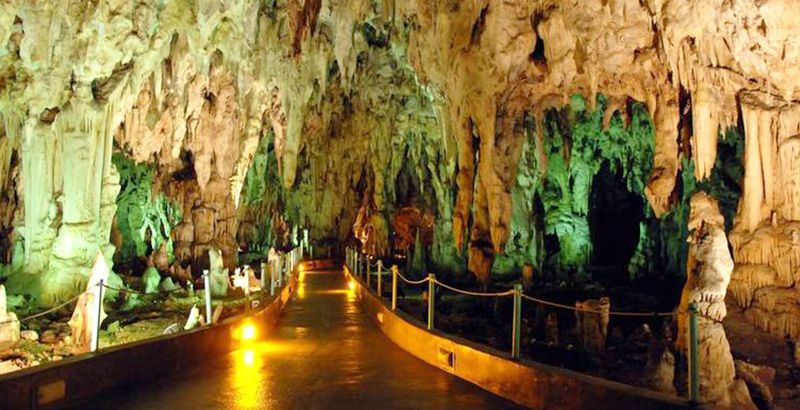 It is no secret that the shores of the Adriatic were a habitat for humans since ancient times, but they were even populated since the Neolithic Period as well! Located on the southern side of the island of Hvar, Grapčeva cave stands as a witness to Hvar’s early culture. The cave is one of the most important and oldest discoveries in the whole of the Mediterranean.

The cave is in itself, a beautiful natural monument, consisting of a small and a big hall which is surrounded by smaller premises. Stalactites and stalagmites decorate the cave, making for a memorable sight especially when illuminated by candles. 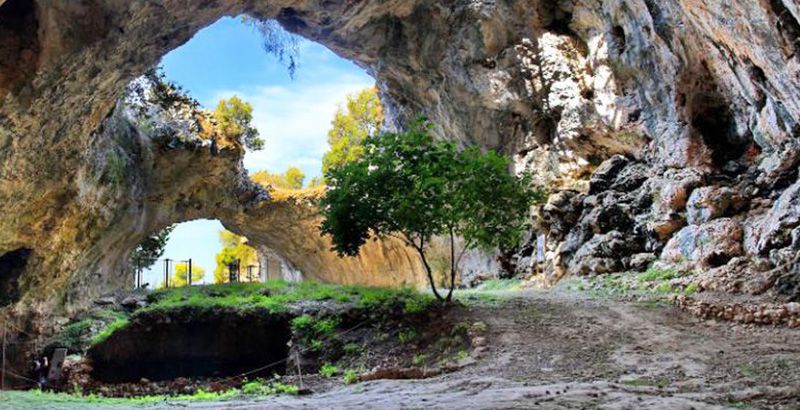 Another cave visited by the prehistoric man, Vela cave is located on the island of Korčula. The objects found at the site that back 13 000 years, while there are proofs of human activity dating back to 20 000 years BC. It is located about 130 meters above the sea level, and is of elliptic shape, with two holes on its roof, through which the Sun illuminates the surface. The cave is considered a natural phenomenon and is a tourist attraction the beauty of which was covered even by the National Geographic magazine.

The unique properties of the Croatian islands, which are made from porous limestone, made for a fertile ground for numerous caves, some of which have entered into a dance with the sea producing marvelous effects.

The beauty of these places leaves no one untouched since according to legend, even queens and Greek heroes made them their home!