The Definitive Guide to Croatian Weather System and Winds

Written by Marin @Danielis on January 09, 2017 in Yacht Charter Advice 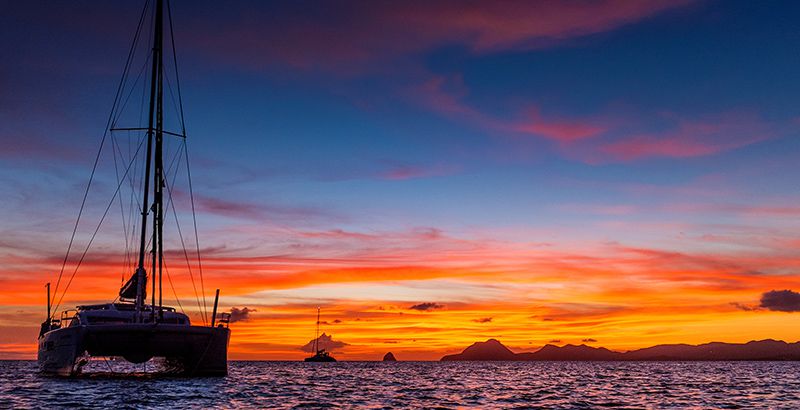 For the most part, Croatia enjoys a temperate climate. Still, temperatures can range significantly throughout the year. Air temperature highs range up to around 30°C, while lows can dip down below 10°C (with a strong wind, that can be bitterly cold).

The sea temperature can reach around 15°C at the lower end and can range up as high as around 25°C on hot days.

Generally speaking, you should plan your visit sometime between April and October. Here is what you can expect month by month:

April: This is a time for mild winds, light rains, and daytime average temperatures around 13°C. So the weather is still pretty chilly, but since it is not peak season, it is less crowded and a great time to visit Croatia. But it is not the best time to swim as the water is still very cold.

May: Heading into the tourist season, this is a more crowded month to rent a sailboat in Croatia, but it is also a warmer time to head out on the water. You can expect lows to hover around 11°C and highs to hit around 21°C. So that is still quite mild. The water temperature is still rather chilly around 18 degrees.

June: If you want to be in Croatia during one of the hottest months, come in June. The lows are around 16 degrees and the highs are around 27 degrees. By this point, the sea temperature is much better for swimming, around 21°C. The only downside is that the crowds can get intense.

July: This is almost as hot and dry as it gets in Croatia. Expect average temperatures during the day of around 28°C, dropping down to around 16 degrees at night. The water is warm, usually around 24 degrees. As you would expect, it is still very crowded.

August: If you thought July was hot, try August. Lows are around 21°C and highs are around 28°C. The sea temperature remains warm through this month. The odds of precipitation are around 25%.

September: If you charter a yacht in Croatia during September, expect daytime temperatures to range anywhere from 16-24°C. The lows meanwhile can hit around 13°C. So things are finally cooling down, but the sea is still a balmy 23°C. Expect more precipitation in September than you get during July or August.

October: During this month, the average temperature during the day drops to around 18°C, while the lows can dip down to 12°C. Rains increase in October as well, with the chance of precipitation being as high as 45%. You may experience thunderstorms. What is nice about this month is that the crowds start thinning out, but you still have 20°C sea temperatures, which is nice enough to swim.

Because temperatures can be quite chilly at night, especially near the beginning or end of the season, you should definitely bring something warm to wear on your vessel.

Layers are also a smart idea.

Sailing Winds You May Encounter Along the Croatian Coastline 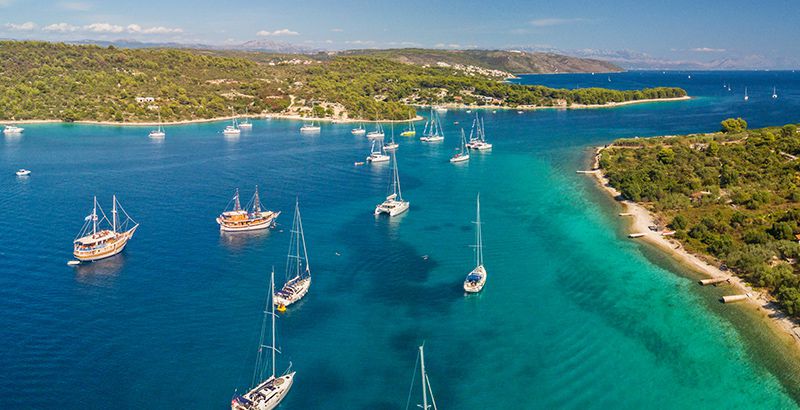 Now that you know more about the temperatures and precipitation you can expect while sailing along the Croatian coastline throughout the season, let’s talk about some of the different types of winds which are indigenous to the Adriatic.

This wind is also referred to as “tramuntana” or “termontana.” It blows in from the north and is one to be wary of for a couple of reasons. First of all, it can be very cold. Secondly, it can spawn seemingly out of nowhere and quickly mount into a full-on gale. When this happens, sea conditions can become very choppy.

After a day, tramontana typically evolves into bura (see below)—and no, that is not an improvement.

Sometimes spelled “bora,” bura is a cold, dry northeast wind. You will generally encounter it when you are sailing close to the mountains. You may notice there are thin clouds circling the peaks when bura comes along.

You know how warm air rises? Well, cool air does the opposite—it falls. Because bura is very cold wind, it literally crashes into the sea, “fanning” out as it does so. If you encounter bura, you will find yourself dealing with rough, broken waves, abrupt changes in wind direction, and heavy gusts. If you fall overboard, you will be dealing with so much spray that you will have a hard time breathing even if your head is above water. There may also be rain or even snow, and bura can go on for two weeks.

If you want to see what Bura is capable of, just look at this photo: 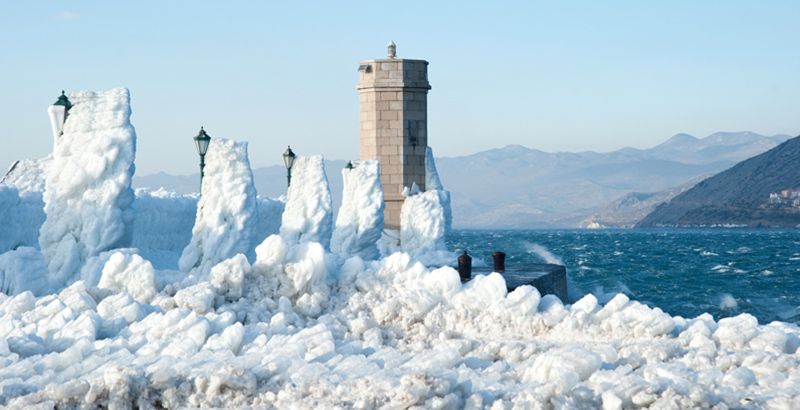 You might believe things are improving when you hit noon, but this is just the result of the warmer air. Get back to shore and shelter during this break if you can, because, after midday, bura will be back in full force. In fact, if you are still caught in bura during the evening, you may be sorry, because, during this time, it reaches its highest level of intensity. It drops slightly again overnight, but dawn is just as rough as sundown.

Bura is most common in the Kaštela Bay, Makarska, the Gulf of Trieste, the Velebit Channel, the Kvarner Gulf, the Šibenik area, the Pelješac peninsula, and the Žuljana cove.

Basically, if you spot telltale signs of bura, get yourself to safety as quickly as you can. Thankfully, it usually is confined to the winter, so you probably will not encounter it if you are sailing in the Adriatic during the tourist season. 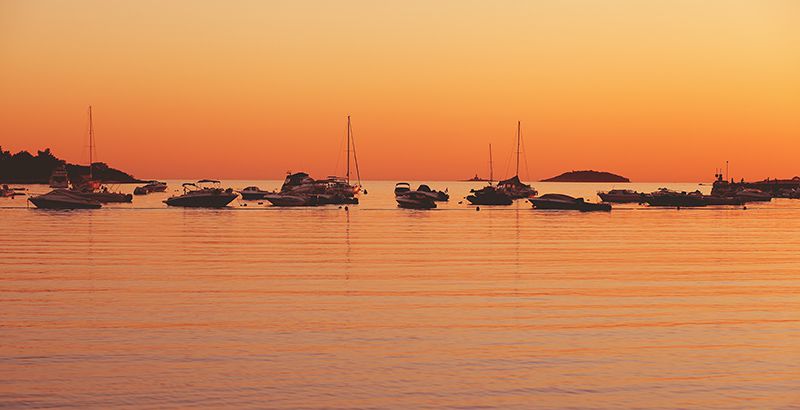 Here is a type of wind which you actually want. It is prevalent beginning in spring and running through autumn, so you will probably encounter it on your voyage. The Mistral begins in the morning and continues through the afternoon, ranging from 9-10 knots. Its consistency makes for some excellent sailing. 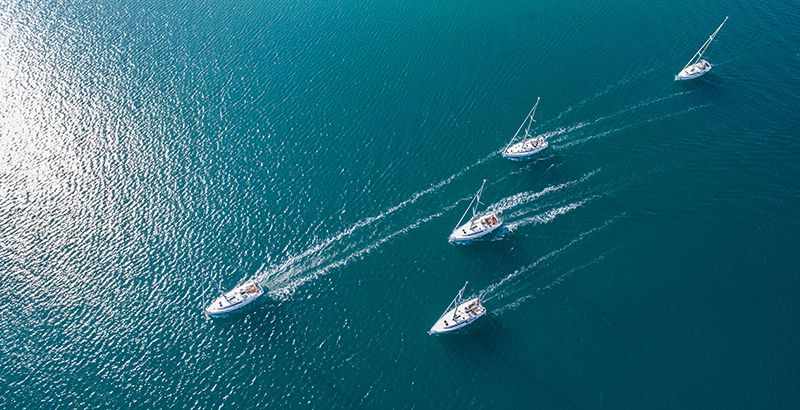 Also called the Adriatic Easterly, this cold wind usually turns up between February and March. The Levant actually is not entirely bad for sailing because of its strength and regularity, though it can get stormy and cold, and should still be avoided by novices. The Levant may persist for days at a time. 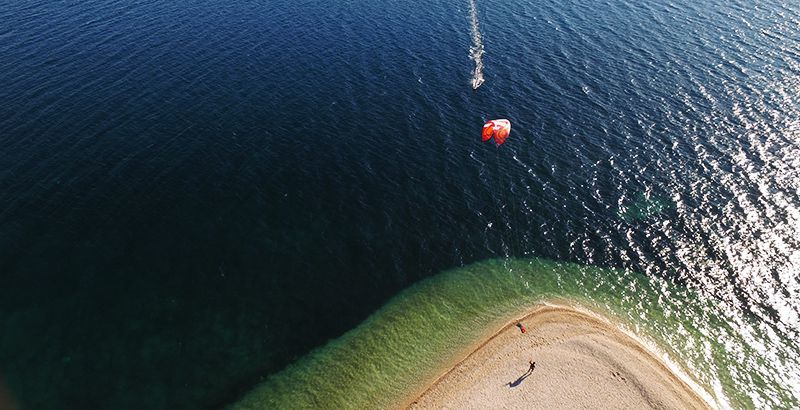 This southeast wind is warm and brings plenty of rain with it. It is sometimes also called “jugo,” and may turn up in either the north or south parts of the Adriatic, generally during spring or fall. Should you avoid it? That depends on your skill level and what you are looking for. You will get some huge waves with jugo, so if you know what you are doing, Cirocco can really fuel your ride. But if you are a novice, they could capsize you.

This wind can be moderate or severe and blows from the southeast. Like Cirocco, Cyclonal Scirocco can deluge you with rain. You can often spot it coming if the horizon is misty, clouds are forming, and the air pressure is falling.

A variation on a theme, this rare wind sometimes shows up in the spring or autumn. It happens if there is a cyclone over northern Europe and there is an anti-cyclone present in the eastern part of the Mediterranean. It is tough to predict this type of wind, but you may get a warning in the form of a misty sky and high clouds racing overhead.

This is a short-term wind which results from warm air rising off the sea during the night time. It occurs close to the coastline.

If you are sailing along on a seemingly calm day with a cloudless sky and very little wind and you suddenly spot heavy clouds brewing in the west, ponente may be on its way. This wind picks up abruptly and can easily knock your vessel over with its sharp gusts and big waves. Treat it as very dangerous.

You might experience Ostro blowing in through the south. It is usually moderate and can last the entire day.

Usually, this SSW to WSW wind blows during the winter months. It is hazardous, reducing visibility, encouraging precipitation, and generating choppy sea conditions. Occasionally it crops up during the summer.

Now you are familiar with some of the winds you may run into when you are on your charter vessel in the Adriatic. As you can see, some of them are beneficial, while others are perilous. Learn everything you can about these winds and their signs before you board your boat, and you can look forward to the safest and most enjoyable sailing experience in Croatia!