Written by Marin @Danielis on November 21, 2017 in Sailing Destinations

Our Dalmatian sailing itinerary is perfect for all sailors who would love to enjoy peace, cruising the crystal clear Adriatic sea, and be only minutes away from historic towns, luxury restaurants and rich night life. On this route you will discover all the perks Dalmatia has to offer: hidden coves and bays, beautiful islands and archipelago, culture and UNESCO protected locations, medieval towns, adrenaline filled sport activities, and you will feast in the best local specialties that renowned Dalmatian cuisine has to offer. 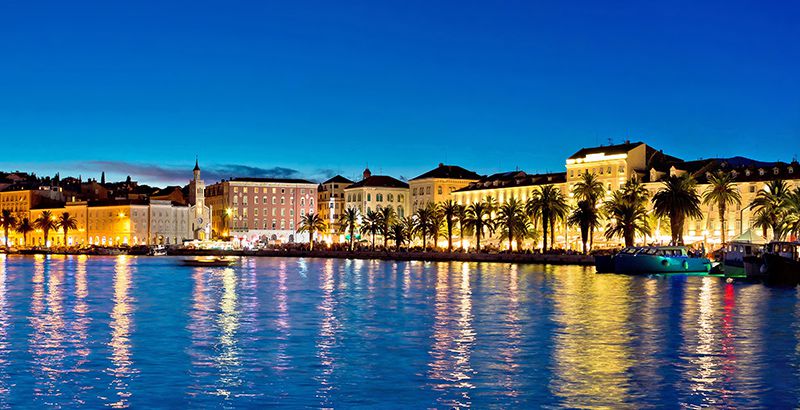 Our sailing vacation will start in ACI Marina in Split, located southwest from the Old town where you can enjoy the great view of Split’s seafront promenade. Splits` ACI Marina is open through whole year which makes it an excellent base port.

The city was originally built around the Diocletian palace (Roman fort) in Dalmatia, Croatia. Because of its ideal climate, with 2,800 hours of sunlight each year, local people have a few nicknames for Split: “The most beautiful city in the world” and “Mediterranean flower”. Wandering the historic center of Split you can still clearly see the Roman walls, squares, and temples.

On day one, you will set sail from ACI Marina in Split to a small fishing village located on beautiful island of Solta called Maslinica. Maslinica is the only settlement on the island of Šolta’s western coast. Known for it’s mini-archipelago of seven isles (Polebrnjak, Saskinja, Stipanska Kamik Balkun, Sarac and Grmej), it’s the perfect place to dive and fish and it`s one of the most popular sailing ports in central Dalmatia. 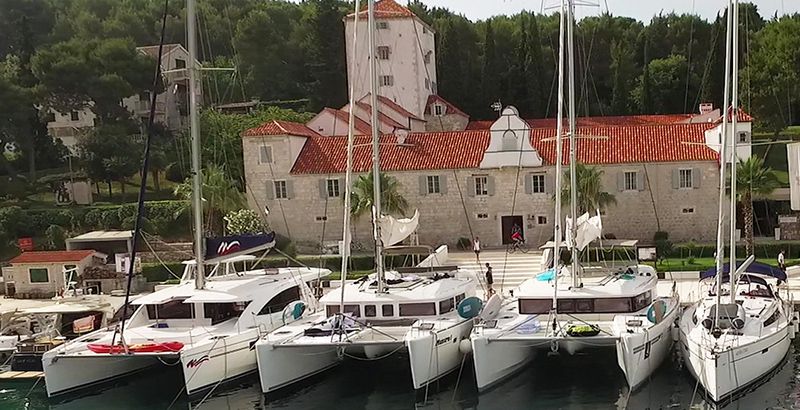 Like Maslinica, the whole island is an island of fishermen, olives and vineyards. When you will sail around Solta you will get the feeling that Solta is the island where time stands still and where memories of some other times are still alive.

Maslinica will be a real paradise for all sailors who want to enjoy the most beautiful sunset in all Croatia and who want to relax and unwind in this place where time stands still. 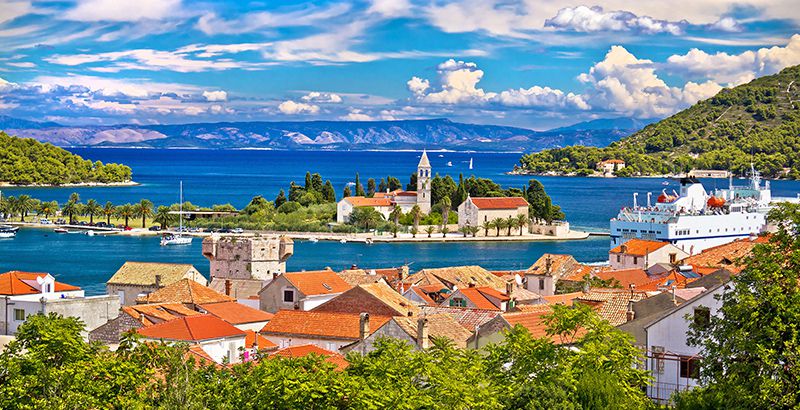 The next stop you’re going to sail to is Vis, a beautiful remote island surrounded by the central Dalmatian archipelago and its numerous small islands. The tiny town of Vis is one of the oldest settlements in Croatia. Greeks established here their colony of Issa (ancient Vis) back in 397 BC.

Unlike its` neighboring islands Hvar and Brac, due to its distance, Vis is a lot less crowded. Cruising around the island of Vis you will have perfect opportunity to explore its hidden bays, grottos, caves and underwater world. This all makes Vis a dream destination for every sailor.

Activities that we would recommend you take during the day, is to visit the highest point of the island where you can enjoy spectacular panoramic views, explore its world-wide famous caves, book a kayaking tour of the island, or take a wine tasting tour or enjoy fabulous local Croatian cuisine.

For all those looking for a good night out, Vis will not disappoint you. At nights, the island transforms into to a vibrant clubbing scene, where you can party until the early hours in the morning.

Looking for something different? We recommend you attend a Military tour which takes you deep underground into the military complex tunnels that were built during the WWII. These tunnels were a well-kept secret, until 1992, when it got opened for sight-seeing.

Yugoslavia’s most famous leader Tito was ordered to hide here by Churchill. Nowadays, there is a relaxed and beautiful island that is a great getaway from the larger cities that connect Vis with the mainland.

Just ask our skipper and he will arrange everything for you. 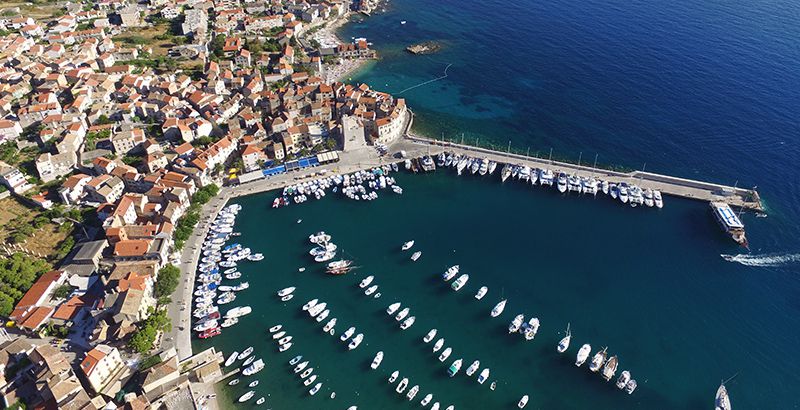 If the weather is stabile, your next destination should be Komiža, a small old Mediterranean fisherman’s town on the far side of the island of Vis. First head for Tiha cove, where you can stay on anchor till early afternoon. Keeps on mind that number of berths in Komiža are limited.

Komiza is cut off from the rest of the island by hill and it faces the sea. Komizas traditional cuisine founded on seafood delicacies and quality local wines as well as beautiful sea side will have all your senses spoiled.

Depending of weather and your mood, choose day stop. You should not miss island of Bisevo and its renowned Blue Cave on the east shore. 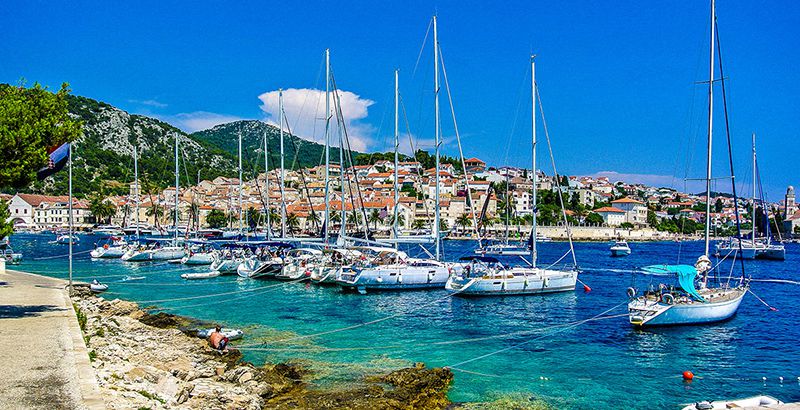 We already wrote about top 10 reasons why Hvar should be your number one sailing destination.

As you know Hvar was voted as one of the ten most beautiful islands in the world. The island of Hvar is an unforgettable attraction with its cultural landmarks, historical Venetian palaces, exquisite local cuisines, sport activities and night clubs. Make sure you go scuba diving, rock climbing or at least cycling while visiting island Hvar.

With an average of 7.7 sunshine hours per day, Hvar is the most sunny island on the Croatian coast and that’s how it earned its nickname „the island of the sun“.

The problem you will face in Hvar is that the town only has 15 buoys, so mooring in the town’s harbor is almost impossible, especially during the high season. But there is the ACI marina in Palmižana, on the nearby Pakleni Islands, just 2.5 nm from the town.

On the island of Hvar you’ll also find great wine and interesting winemakers, as well as very good olive oil and lavender-based products.

If you like partying Hvar will be your favorite destination on this route. Hundreds of party people from all over the world flock to Hvar for one of the best parties in the world. Even Ultra Europe parties are held on Hvar. You might find yourself rubbing shoulders with your favorite celebrity like Beyonce or Jay Z who couldn’t resist the charms of this island.

PS Make sure to cruise around Pakleni Islands! 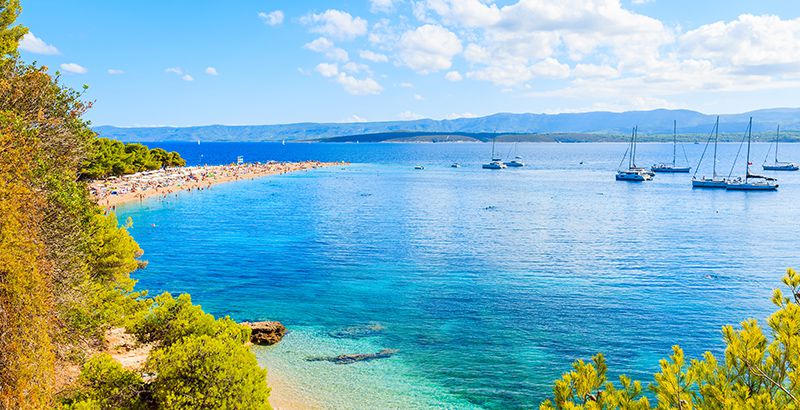 After a night of partying on Hvar you will set sail to Brač. Cross the Hvar channel and try finding a cove to take a break.

Bol is also famous destination for sport enthusiasts who enjoy windsurfing and kitesurfing and has a long tradition of night life with some of the most amazing cocktail and beach bars.
With its numerous cultural and historical sights, it is one of the most popular tourist destinations in Croatia. 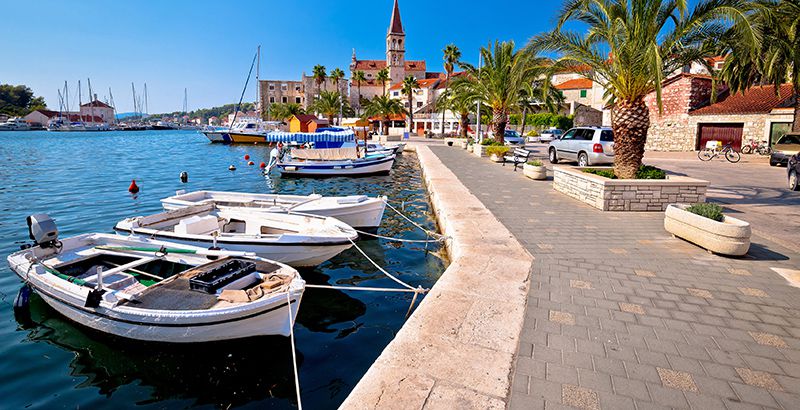 Today, as our sailing journey reaches its end, you will sail to more romantic and relaxed destination, a village set in the wonderful bay, located on western part of the island, called Milna.

Milna is the most popular nautical destination on the island, located just few nautical miles from the island of Solta.

Milna is protected from winds so we recommend you relax, sunbathe, swim, snorkel and explore some of its beautiful sandy and shingle beaches (Pasika, Osibova, Lućice, Maslinova).
While here, make sure to visit the Hermitage Blaca. 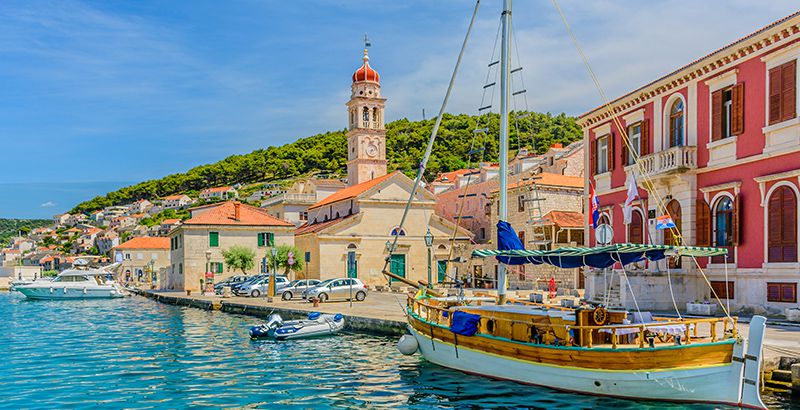 On your last day we will sails from Milna back to Split.

We already talked about Split on the beginning of this article. Split is our favorite town on Dalmatian coast. It is famous for the Diocletian’s Palace. Usualy when people walk around the Split they ask “Where is the palace”. And we like to answer “You are already in it”. The palace is not a common monument but actually a living, breathing city.

Split has excellent restaurants, its residents have a fun spirit and unique approach to life, the women here are of impressive beauty. Split is getting very popular, and can be a bit crowded depending on a time of the year you visit. But there are still less visited corners, where you can avoid hustle and bustle.

If you need any additional information regarding sailing in Croatia, chartering a yacht staff from Danielis Yachting is here to help you.

Hope to see you soon!