10 Reasons Why Hvar Should Be Your Number One Sailing Destination

Written by Marin @Danielis on November 12, 2017 in Sailing Stories

The miraculous island of Hvar has been inhabited since pre-historic times, but it was the ancient Greeks that established their first colony in the 4th century BC in Stari Grad that led to development of the island as we know it today. They chose to settle here because of the large plot of fertile land, which is rare for the islands in Croatia.

The town of Hvar didn’t come about until the Venetian times when they moved the capital to its current day location in the beautiful protected bay of Hvar. 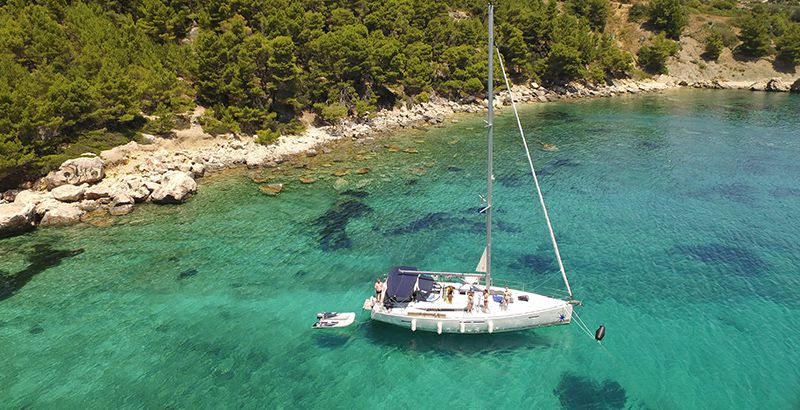 Main square and the central point of Hvar Town is called pjaca. With size of 4,500m2 pjaca is the largest square in Dalmatia. In summer, the square becomes the central point of town with all cafes and restaurants overflowing, but there is a much more tranquil feel after the season, as locals relax over a coffee.

Overlooking St. Stephen’s Square you fill wind St. Stephen’s Cathedral. The first church on the site was built in the 6th century and was granted cathedral status in the 13th century when Hvar Town assumed the Bishopric from Stari Grad. The Cathedral you see today was finished in the 18th Century so the intermittent construction period gave rise to different architectural styles. Elements of Gothic, Romanesque and Renaissance can be found and on the inside you will see eleven Baroque altars made by artists from Venice. 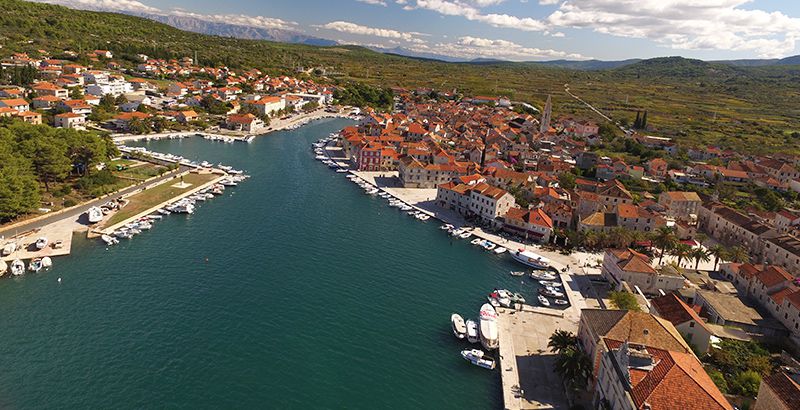 Stari grad is the island's former capital, one of the most unique towns on Croatian coast and an absolute must see for all travelers. Old Town was founded by the Ancient Greeks in 384 BC.

If you are in love with history and agriculture you will love Stari Grad, there you can find the largest cultivated field on the Adriatic, the stunning UNESCO-protected Stari Grad Plan, where olives and grapes have been grown continuously for 24 centuries. The town's restaurants are some of the finest on Hvar, many of them open all year, making Stari Grad one of the more attractive options for out of season travel. 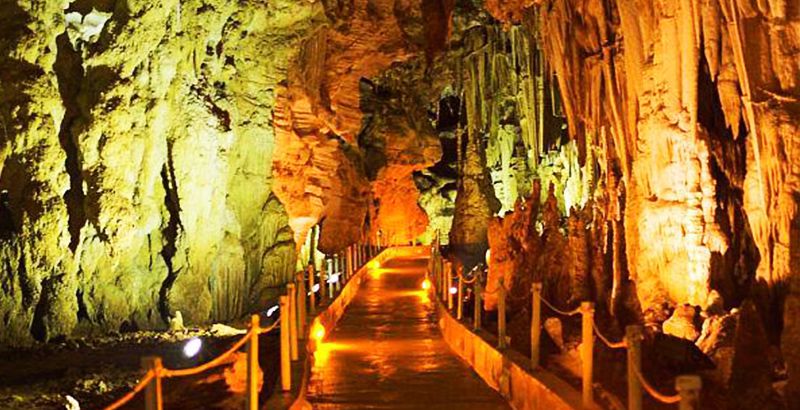 Also a rarely mentioned attraction in Hvar is the Grapčeva Caves, which date back to the Neolithic period. 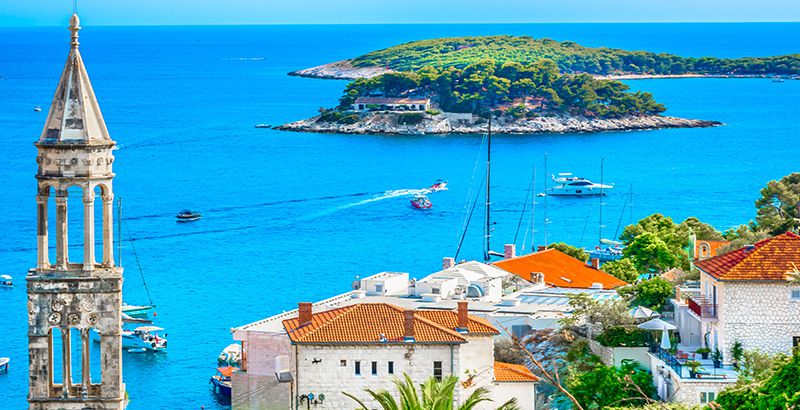 Hvar Island is known for its excellent climate; warm summers and mild winters. The town of Hvar is being illuminated in over 2,800 hours of sunshine each year. Besides great climate and rich culture, island of Hvar offers beautiful views overlooking the Adriatic Sea, which makes it favorite destination of many holidaymakers.

Maybe the most difficult situation that you will encounter while sailing around the island of Hvar is the making decisions. When Lord of the rings scenes become your reality, and are hiding behind every corner, we admit - it is difficult to make a choice. Hvar has a great selection of beaches and even more hidden coves and bays: rocky, concrete or sandy, there is just so much to choose from. Some of the most popular family beaches include Soline near Vrboska and Mina and Grebišće near Jelsa. The Pakleni Islands have plenty to offer, while naturists can indulge themselves freely in a number of dedicated spots. 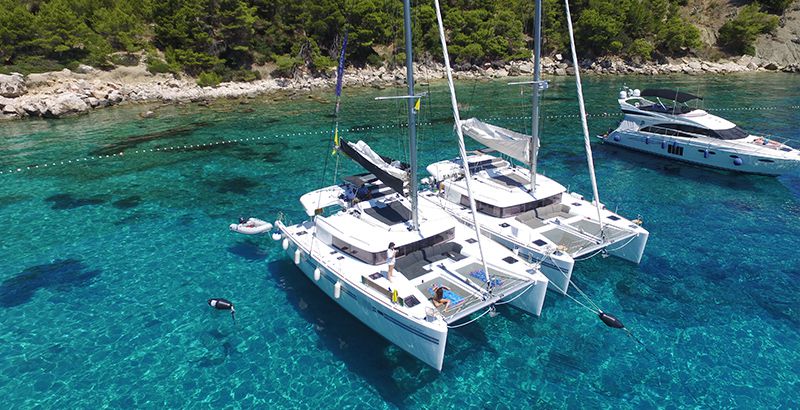 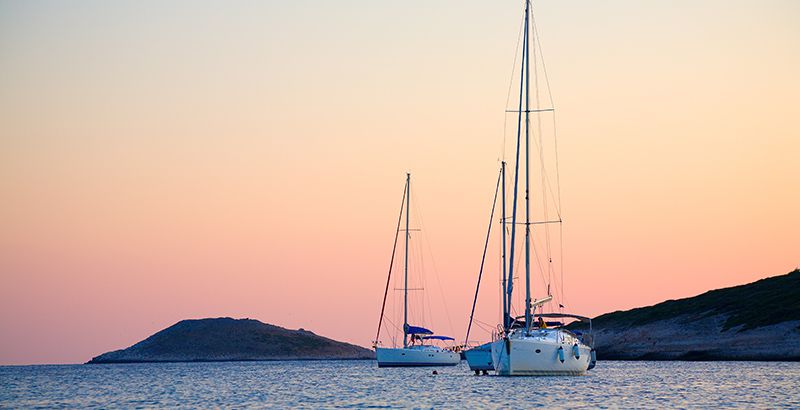 When you are planning your route and are leaving Hvar with your yacht or catamaran towards St. Nedjelja, right after the coves of Dubovica and Pišćena you will find Crvene stijene (Red rocks). Red rocks are one of the nature's works of art and can surely be descried as one of the scenes that you can see only in Hollywood movies or in fairy tales. You will sail around magnificent vertically disintegrated reddish cliffs which are merging with the ocean and creating beautiful scenery that the natural force of the sea and rain has created on the layers of limestone. Take a look at this photo; it will give you just a glimpse of what red rocks really are all about.

You love sailing on your yacht and already have discovered how island of Hvar is diverse? Well you still haven’t seen the stunning Pakleni Islands, tiny emeralds in a pristine Adriatic. 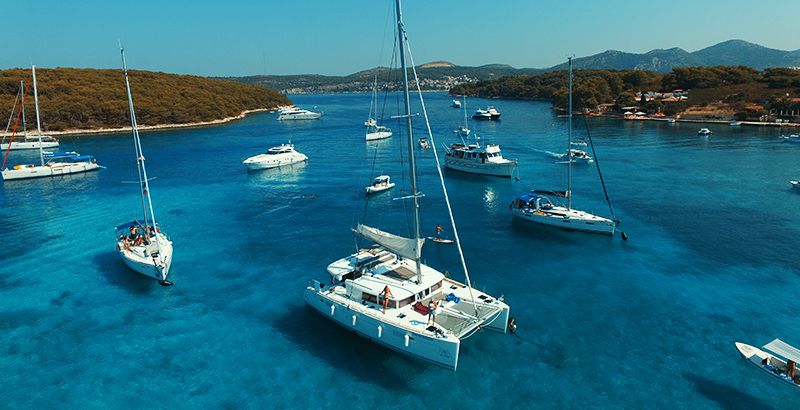 The best advice we can give you is to moor at Palmižana Marina located on the island of Saint Klement. Cruising around Pakleni Islands will not just give you a breathtaking view to enjoy but it offers some of the best beaches and food in the area as well. With four restaurants, a cocktail bar, scuba-diving and an art gallery all within a few min walk from ACI marina you'll see why we recommend it.

There is something for everyone on Pakleni Islands: naturists can enjoy the freedom of Jerolim, while lighthouse enthusiasts will be drawn to the picturesque Pokojni Dol islet. You can go scuba-diving near Vodnjak, the island the Mayor wanted to rename Facebook or dine in the old artillery fort turned eco-island Galešnik.

For those of you that enjoy night life want to have some fun, you can visit the most famous Carpe Diem Beach Club at Stipanska. 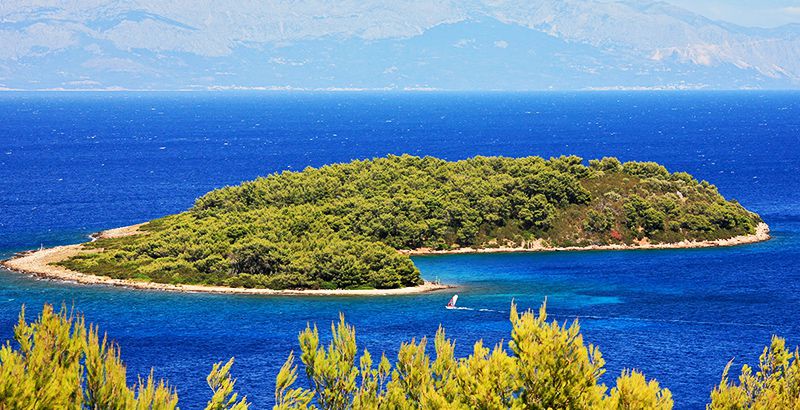 Zečevo is perfect island for all who enjoy freedom, the smell of untouched nature, clean waters and solitude. If you are sailing on your yacht, you can reach it from both Vrboska or Jelsa. 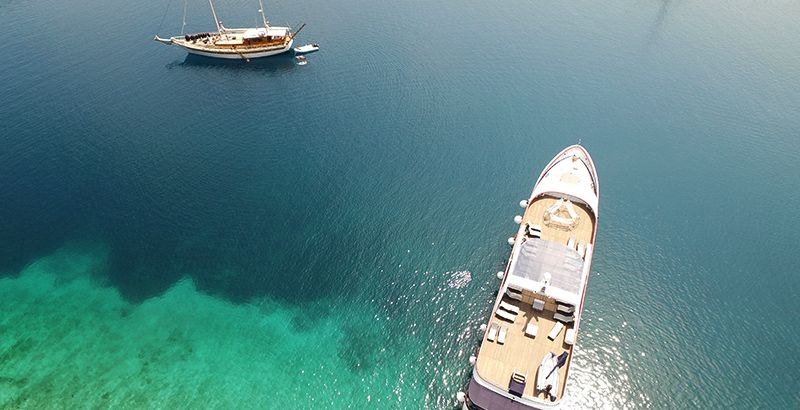 Šćedro, a protected nature park, is a smaller island located on the southern part of Hvar Island. Šćedro is blessed with many coves where you can spend the day, dipping your toes in the water.

Although you won't find Šćedro crowded with many people, you won't be the only one – during the day many boats take anchorage here to exploit its beautiful bays.

Want to see something cool? Go by foot up the hill and you will discover the abandoned stone village of Nastane. 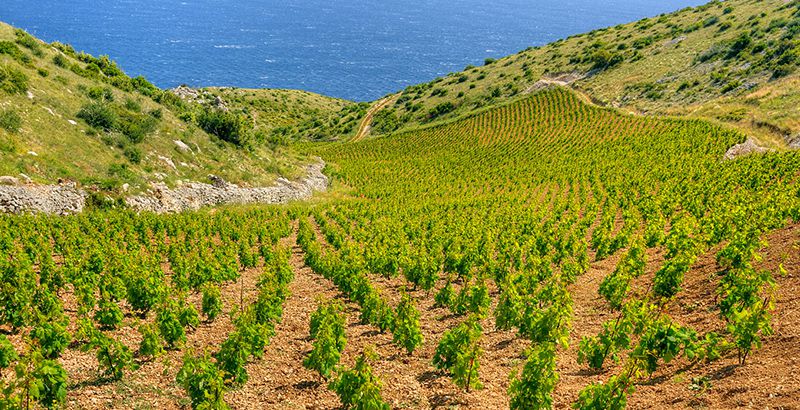 For all real gourmets among you sailors, gastronomic offer of island Hvar will be an absolute delight. As the sun goes down the island comes to life. Restaurants and bars are serving food and drink until late hours.

We encourage you to visit seafood restaurants which prepare the freshest catch from the abundance of the Adriatic, accompanied by an outstanding choice of locally-produced vegetables. Looking for a typical meal of Hvar? Then Greagada should be your choice. It`s a fish stew cooked with white wine, parsley, onions, garlic, capers, salted anchovies and potatoes.

Meat lovers will also enjoy the offer, there are plenty of restaurants to choose from and the meat is excellent, from lamb on the spit to the renowned peka dish (under the bell).

All this is washed down with some of the finest local wines. A wine tour of Hvar's best wineries should be on the top of any wine aficionado's things to do list! Why? The Hvar wine industry is undergoing something of a renaissance and is attracting greater international attention. The most famous wine is Plavac Mali grape variety – a red related to Zinfandel. 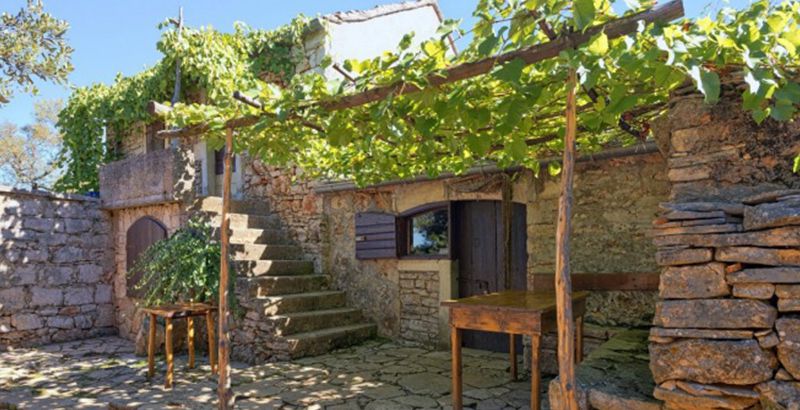 The island of Hvar is more than just coastal towns; interesting parts of the island are also incredibly diverse villages that preserved true Dalmatian way of living until today.

You will have more than plenty to choose from. We would recommend hauntingly beautiful abandoned stone villages of Humac and Malo Grablje. Humac consists of well-preserved simple stone houses considered today a monument of rural architecture. There is only one tavern in a village, and it’s open only in summer.

Old traditions really come to life with the lavender festival in Velo Grablje and the dormouse festival in Dol. Want a more peaceful setting? Visit Rudina or move further east and enjoy nearby bays of the depopulated villages from Poljica to Bogomolje. 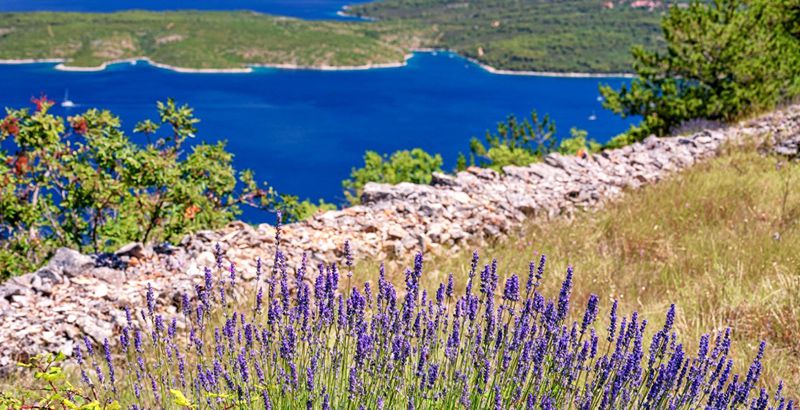 People of Hvar still grow their grapes, olives, and veggies on this fertile land. However, lavender is the stand out crop and has become what the island is known for. The most popular is the lavender oil used as a sedative and headache relief. Less popular, but more interesting, we found one ice cream vendor selling lavender flavored gelato. You can witness here the ancient trims and dry-walls. Small farmers’ shelters, built of stone without using any cement, still remain intact. It also perfectly shows geometrical system of ancient land division, known as chora. 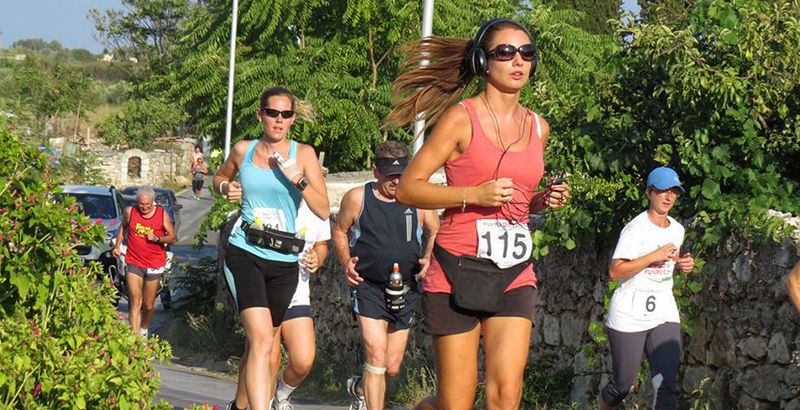 You have been introduced to Hvar as a popular destination for its great beaches, excellent nightlife and a perfect climate, but the range of activities that are available on the island are not known to many.

We have good news for all adrenaline and sports junkies out there - adventure enthusiasts will love Hvar. There are plenty of adventure sports to try on Hvar such as: you can go rock climbing, scuba diving or you can lose yourself in the Pakleni Islands in a kayak or while sailing. There is the chance to compete in the Hvar Half Marathon, or swim the 16km Faros Marathon, cycle the islands roads or hike in its hills.

For the more sedate visitors may like to investigate yoga, wine tours, off-road safaris and art classes.