Written by Marin @Danielis on April 14, 2017 in Sailing Destinations

The biggest of them is definitely Vodice, with ACI marina bulit 30 years ago. Vodice is the most famous tourist detination on the Sibenik riviera. It also has berths on the local pier. Both the ACI marina and the local pier are located in the city centre, so it's easy to stroll around the city, it's local bars and restaurants. Vodice town is quite popular due to it's nightlife as well. In the summer, there are plenty of bars and clubs. Vodice's nautical life lives from early spring to late autumn. For years it was a starting point of Easter regatta, one of the biggest croatian regattas (the biggest for the prize money), and the famous regatta Jabuka also starts from Vodice every December. 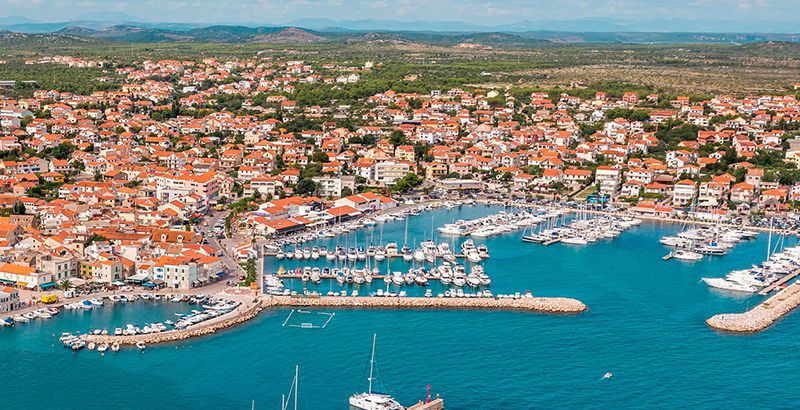 Different vibe awaits at Tribunj town, only a mile and half away to the west. One of the most picturesque towns in Dalmatia has lived through it's nautical boom 12 years ago when the marina was built. It is one of the best and most equipped marinas in the Adriatic, intended exclusively to boat owners, not charter companies. Tribunj also has a local pier with 20 berths. 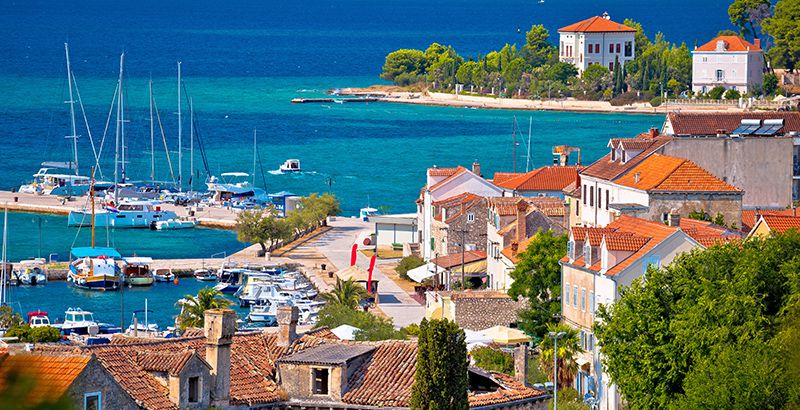 From the St. Nikola fort at the exit of St. Ante channel to island Zlarin, you could practically swim. From Zlarin's north cape to the mainland there's only a mile distance. However, this island is very worthwhile a visit. Austro-Hungarian Monarchy has gifted Zlarin with a giant local pier 140 meters long. There you can dock, and there are also buoys right in front of town. There are no cars on island Zlarin, so the only means of transport are your feet, or eventually a bike. That gives it that extra serenity.

Zlarin town's bay is well protected from the south wind, and also NE Bura wind, but it's quite open to strong NW or summer storms (which usually come from NW or W).

The island right accros from Zlarin is Prvic. Is there a point of sailing to the island only a half a mile away from the mainland? 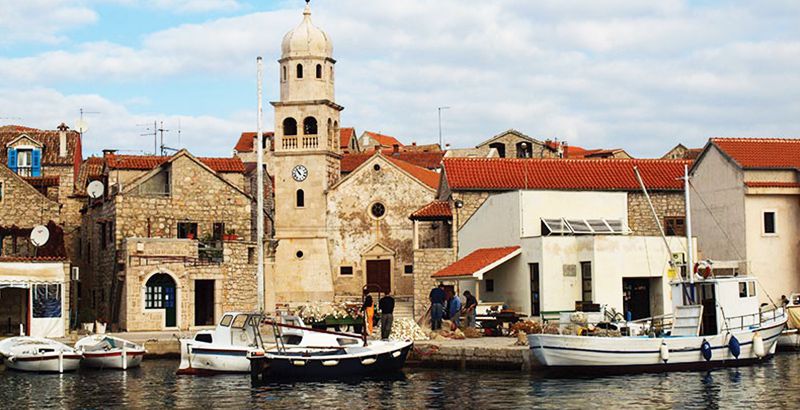 Of course there is. Around 50 berths on this island which are almost always full, confirm that statement. Zlarin and Prvic are usually a great spot for the first or the last night of your cruise when you start from Sibenik. But, that is not the only reason. Prvic port is a great shelter for yachtsmen in case of northern and western winds, but the 110 meter pier in Prvic port is also a good shelter for south wind. There is about 20 berths equipped with water and electricity, and 12 more buoys in the bay.

There are two settlements on the island Prvic. Prvic port and Sepurine. Prvic porti s older, inhabitet in 12th century, and Sepurine is from 16th century. The most intensive wave of migration has stroked the island in 15ht century, when people from the mainland escaped the Turkish attacks. At that time, the major part of the island was owned by Vrancic family, which had their summer house there. They also gave us Faust Vrancic, a famous philosopher, historian and physicist who invented a parachute.

He spent his life living in Bratislava, Padova, Prague, Rome and Venice, and by his wish was buried in the church of St. Maria.

Few years ago a memorial centre was founded on the island and it's 'not to miss' on island Prvic. For those who don't feel like cooking on the boat there are 5 restaurants opened in the season.

Other village on island Prvic – Sepurine is also a beautiful and a harmonius place, but not really safe to dock. It's open to southern and westerly winds. The best way to see Sepurine is to take a walk from Prvic port.

Kaprije is getting better from year to year. Harmoniuosly renewed part of the old settlement, growth of nautical facilities and services and a good spirit between it's a bit more than a hundred inhabitants. Kaprije is a bit more further away from the mainland than Zlarin and Prvic, and it is situated on the routes of those who sail from Kornati to the south and the other way around, so their porti s always quite full.

It's a quite a big bay, but opened to north and north west winds, so you should be careful. With the northwestern winds the best is to be in shelter of the local pier which hold 18 berths with water and electricity. Along with those moorings, there are also 24 buoys in the bay, sometimes occupied with 2 boats on one buoy. Anchoring is also possible on a sandy bottom which holds pretty well.
The village itself is not that beautiful, especially because it came down from the hill to the sea with only new houses being bulit there, but still attracts a great number of sailing guests.

On the eastern side, there is one anchorage with 10 buoys and the tavern Kunjka.
On the southern side in the bay Mala Nozdra there are also buoys and two taverns G8 tavern and Matteo. 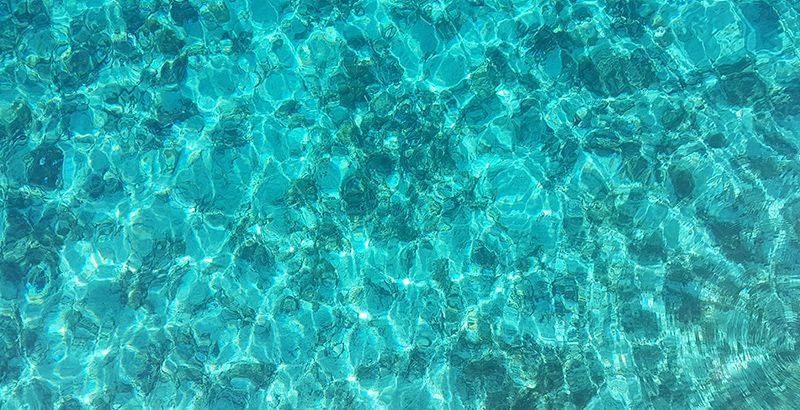 Kakan island has no inhabitants, and we could say that together with island Kaprije, they make one whole destination. Along with two small islands called Borovnjaci which protect the bays of Potkucina and Tratica Kakan has 90 buoys and even more space for anchoring. There are three restaurants with these anchorages. Babalu close to Borovnjaci and Sedmo Nebo (Seventh Sky), and in the other bay Tratica more south is Paradiso. Paradiso is a bit expensive for what it gives, but good, and the other two have more robinson atmosphere.

The anchorage under two small islands Borovnjaci i slike from a fairy-tale. These two islands border the lagoon which in good weather spills across spectrum of blue and green colors.

There are 60 buoys in that anchorage, but really there is a loto f space, so you won't have a feeling that somebody is peeping into your boat. 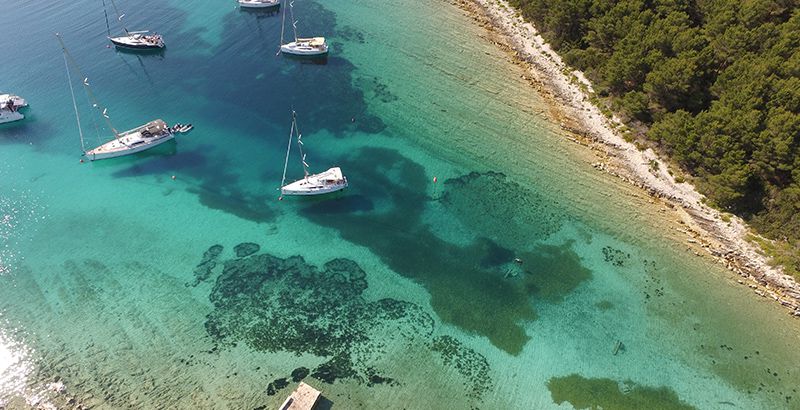 From all the islands of the Šibenik archipelago, Žirje is the furthest from the mainland. This distance from the mainland has carvede the destiny for this island in the past. In 6th century Roman emperor Justinian had bulit forts on this island to oversee the waterways and navigation in the Adriatic. This was continued under Austro-Hungarian rule when they had cannons on the island to protect the waterways. In world war II Italians inherited this island, and than after the Yugoslavian army. Luckily for Croatians, in the last war for independence an Yugoslavian army officer was a nice guy and he surrendered to Croatians easily, so these cannons had a good impact on the defense of Sibenik city.
Today the significance of Žirje island is mostly nautical. Again it's because it is situated in the middle of waterways going from north to south and the other way around. Everything revolves around three anchorages on the south side of the island and two setllements on the north side, altough the anchorages are much more attractive.

The first is Tratinska which is more north. It is not that beautiful, and altough it goes half a mile into the land, it is open to the south, so with the strong south wind you will not feel that safe.

Vela and Mala Stupica 4 miles to south east are much nicer, but alo quite open to south wind. Top 8 Tips to Make Sailing With Kids Even More Fun