Written by Marin @Danielis on December 16, 2020 in Sailing News & Events

The promoters of 22nd nautical fair Biograd Boat Show were lucky enough to, despite the challenging situation with global health crisis, hold the manifestation in the end. The show took place in marina Kornati between 21st and 25th of October. It was the third boat show this year and probably the last manifestation of that kind before the second wave of the dangerous virus began to spread and if the show had been scheduled only a week later, it would have probably been canceled, due to aggravation with the epidemiological situation. Not only that, but the weather was perfect as well – 4 out of 5 days of fair were sunny and warm! And luckily so, because the fair this year was successful for 240 exhibitors and over 14 000 visitors who had a chance to dream about the next season when they will once again have the possibility of spending carefree sailing vacations on the Adriatic. Almost summer atmosphere proved to be excellent for a nautical fair because most of the motorboats could have been taken for a test drive. Although the marina was still lively and opened for the charterers, it was not particularly crowded. The strategy of extending the fair over 5 days worked very well and all public safety criteria were met, thanks to the close cooperation of promoters with the Public Health Department and the Zadar County Civil Headquarters. The disinfectants were available literally on every step, everybody had to measure the temperature at the entrance and most of the visitors wore masks. The only bigger changes in the organization were obvious on the inside of the half-empty tents, as the number of people had to be restricted. Also, the legendary entertainment program had to be sacrificed for the sake of everyone’s health. As the fair progressed, people were more and more relaxed, so the conversations about the health and the dangerous virus were replaced by more pleasant topics about novelties in boat design.

The number of exhibited vessels was smaller than the last year’s, therefore, there were also fewer premieres. However, the visitors were quite satisfied at the end, because the offer was really wide, so the visitors could get acquainted with the current trends in the nautical world.

To begin the report, we can single out the return of the well-known brand Kosanović. It is a small family business, with only 6 of the employers, determined to conquer rivers and seas. They exhibited an adapted model of an elongated pasara Kos 570, a small vessel, weighing 750 kg, with a gigantic platform for all activities, especially for the fishery. The ribbed design is very retro, but it is obviously still in high demand. The strongest possible engine for this boat is 10 hp, so it doesn’t leave much place for additional investments, but thanks to the long waterline, the boat reaches 5 knots with only a 3 hp engine. 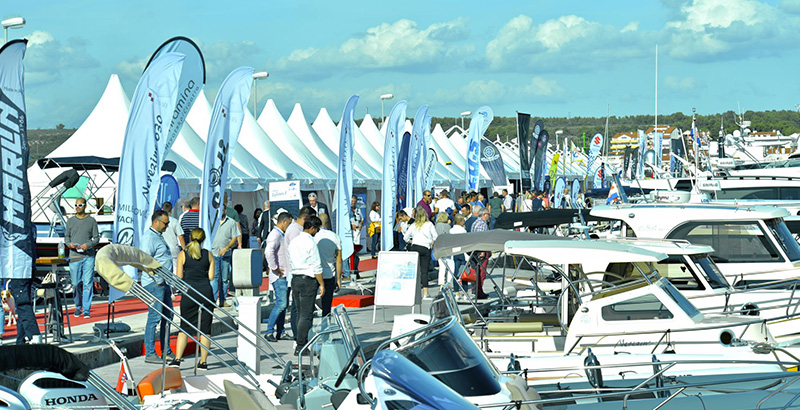 This is what the past looks like. But the future is electric, according to the automobile companies’ directors. Danish boat Rand Mana 23 is produced in Kastela and moreover, the credits for the development of this easy, but technologically advanced boat goes to the Croatian engineers as well. Weighing 690 kg (without batteries and engine) and with the dimensions of 720x230 cm, this boat is similar to Kos 570, however, its price is about 5 times higher. How is that possible? Simply, this boat offers what buyers from all around the world want – a nice design and modern electrical drive. Despite the fact that the maximum speed this boat can reach is 6 knots.

After having built a successful semi-submarine and a taxi catamaran, an innovator from Biograd, Mladen Peharda, adopted the new wave in building the boats so he invented an electrical retro boat Solar Ferry. Twelve passengers in total can ride on this boat, with a hull that is 8.5 m long and an elegant stern. The boat will ride on the lake Vrana and it is solar-powered.

Considering the quality and the design, a Croatian product worthy of the world’s stage is Terra Nauta 30, a model that has recently been redesigned from the older version Terra Nauta 28. It impresses everyone, but because of its high price it is mostly unavailable to the domestic audience, so the marketing is oriented toward foreign states. The original engine is Mercury 350, however, the basic model leaves the possibility of installation of the stronger engine, such as Volvo Penta 330, although the models with Volvo Penta are rare because of its high price. 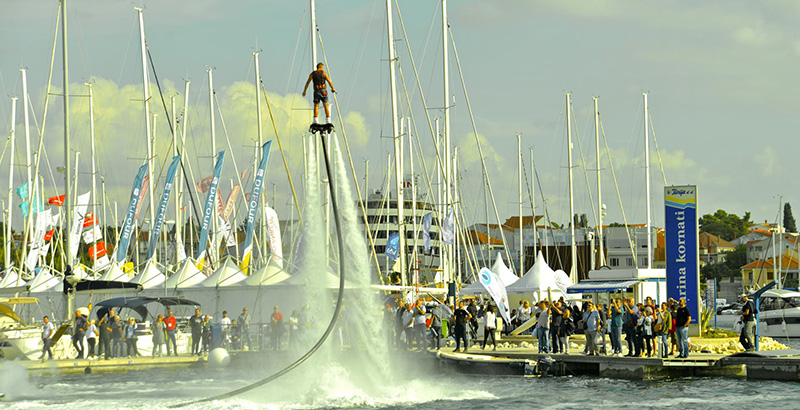 The Biograd Boat Show was also interesting when it comes to the boats that are more common in charter in Croatia, such as Beneteau Antares and Merry Fisher. The last novelty from Merry Fisher is 795 Serie 2 and it really has no competition at the moment. Toilet, 4 berths, galley, and living space are everything a family needs in the beginning. It is considered an introductory model in the nautical world because the majority soon desires more.

Biograd Boat Show was conceived as a charter expo, so it doesn’t surprise that the most represented vessels were sailing boats and catamarans. While some would say that monohulls have reached their maximum, it looks like the designers of catamarans have just warmed up for conquering the Adriatic. Except for the whole fleet of Hanse sailing boats, Croatia Yachting presented three new Bali catamarans – Bali Catspace, Bali 4.8 and Bali 4.3 motor version. The performance under the sail is not the most interesting about catamaran Bali 4.8, because its layout got special attention. The layout of the catamaran is what turns the boat into luxurious comfortable villas. One of the signatures of the Bali Catamaran is a lounge area in the bow which is entered from the salon as if it was a house. Six cabins with six toilets on a 15 m-long hull is a real architectural wonder, but it also costs. Bali Catspace, 11,4 m long, has a significantly lower price and it is an affordable option for an owner who wants enough living space, flybridge, and big windows with a lot of natural light. On the other hand, motor version Bali 4.3 is almost as expensive as Bali 4.8 and it has two powerful engines of 250 hp.

One of the most famous brands, Jeanneau entered the world of catamarans with the Excess model, so Euromarine company, which is their representative in Croatia, proudly introduced these models. While Bali catamarans are not the best in performing under the winds, the Excess models are designed with the intention to sail. Their performance is significantly better and the look of the hulls is modern and curved. It comes in different sizes – from 11 to 15 m with 4 cabins and two toilets.

When it comes to the monohulls that are represented at the show, the highlight is Beneteau First 53, one of the most beautiful sailing boats that were represented last years. The First 53 that is available on the Croatian coast is an owner version with 3 cabins and 2 toilets. Despite its high price, the demand for this model exists because it offers not only luxury and comfort but also exceptional sailing performances as a race boat. The 3-cabin layout guarantees maximum comfort and with its flat deck, it looks ready for action in the regatta. 5 Tourist traps to Watch out for in Croatia Where to Party in Croatia When Sailing: Guide to the Top 10 Croatia Summer Festivals Difference Between Sailing a Monohull and Catamaran